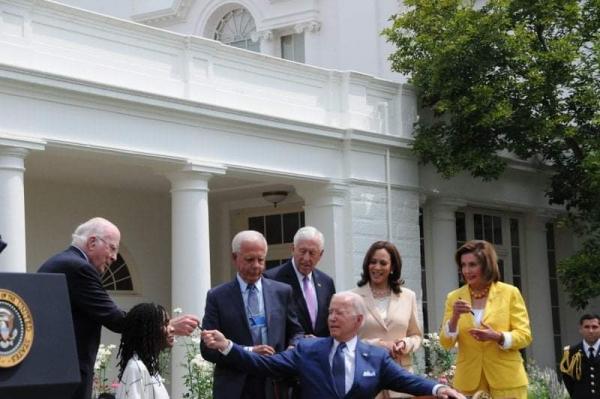 Today President Biden signed the bipartisan VOCA Fix to Sustain the Crime Victims Fund Act of 2021.  I thank President Biden and my fellow senators for working together to provide this urgently needed legislation to ensure the continuity of services for victims of crime across our nation.  This bill will make a real difference in the lives of millions of Americans.  I was proud to support this legislation as an original cosponsor and to watch President Biden sign it into law this afternoon.

The enactment of the VOCA Fix Act comes at a critical time.  The Crime Victims Fund, established in 1984 by the Victims of Crime Act (VOCA), is a lifeline for thousands of crime victim programs across the country.  However, it is projected to reach a 10-year low by the end of this year.  The VOCA Fix Act that the Senate unanimously passed earlier this week will help protect a steady stream of deposits into the Crime Victims Fund so that critical services for victims of crime are not abruptly cut off.

From Vermont to California, state programs providing direct services and support to victims of crime are facing catastrophic cuts.  In my home state of Vermont, grants for crime victim programs are at a five year low — meaning less funding for crime victims, in the midst of a pandemic that has presented unique challenges to victims of crime and the organizations that support them.  The VOCA Fix Act will help stave off the worst of these cuts.

I have spent my career supporting and advocating for crime victims’ rights and restitution.  As a former prosecutor, as Chairman of the Senate Judiciary Committee, and now as Chairman of the Senate Appropriations Committee, I have long led efforts to protect funding for the Violence Against Women Act (VAWA) and the Victims of Crime Act, the two federal programs providing direct support to crime victims.  As Chair of the Judiciary Committee, I also was the chief author and sponsor of the last reauthorization of the Violence Against Women Act in 2013, which expanded crime victim services to LGBTQ individuals and other vulnerable populations.  Two years later, I helped raise the cap on the Crime Victims Fund so that Vermont and other states would be eligible for more funding.  This Fund is critical and I am proud to support this legislation that will help to ensure its future viability.

While today represents a major legislative victory, we must acknowledge that our work to strengthen protections for victims of crime is far from complete.  The Senate must continue its bipartisan work to improve and reauthorize the Violence Against Women Act this Congress, and I look forward to doing everything in my power as a senior member of the Senate Judiciary Committee and Chairman of the Senate Appropriations Committee to assist in that effort.